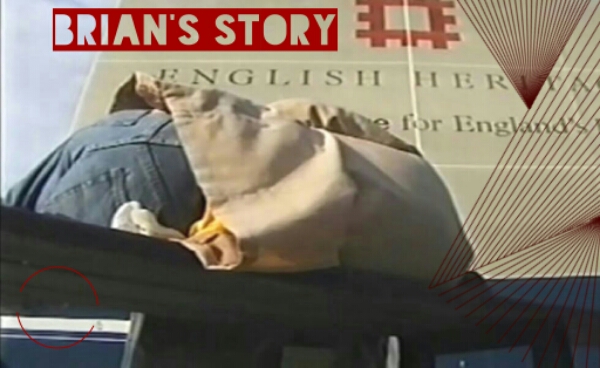 Brian Davis had a successful career in advertising journalism once; the documentary begins with him homeless in London, drunk and asking mates for money so that he can go to Paris to interview Roman Polanski. His rather rah English accent descended frequently into streams of invective. Brian, of course, is bipolar (mostly untreated) and alcoholic, poor chap. He scored 150 quid and literally ran to the Turk’s Head in Soho to drink it all. So much for Paris.

The enigma of Brian’s life is how someone who brought perfect discipline to his writing managed to foul up everything else. Possibly the gift was so all-consuming there was nothing left over, but he was also continually dogged by catastrophe. (Bernard Barnett) source

I didn’t like him. I pitied him, but found him obnoxious – I suspect he’d be annoying in any circumstances, successful or not, drunk or not. There he was, grimly clinging to that particularly English sneer of superiority and thoroughly pissed off with everything. I wondered whether he’d show some humanity, redeem himself somehow. Maybe the grandiosity, the dreams and his sense of self should be admired though. After all, what else did he have?

Every day is a combination of French farce and Tarrantino, it’s pure Jean Luc Goddard (Brian)

Brian was right about the farce. He moves into his cousin’s place in Liverpool and is seen standing in the living room, swearing at the turntable he can’t get to play albums at anything less than 45rpm. “Aberration!” The other prime example was a woman he chatted to, telling him that she’d stolen Herman Hesse’s granddaughter’s boyfriend, Dante. It’s tragi-comic; it’s possible to laugh at the events themselves, but not at the people and circumstances involved. He struck me as a remnant of an earlier age, one that ended when the 60s did, full of sardonic existentialism and desperate fatalism. There’s a brief shot of him, lying crumpled and defeated after a night sleeping rough; the despair evident in his cry of, “help me!” is gut wrenching, and possibly the most telling moment in it all.

Disasters were starting to engulf Brian, that sad trail of “accidents” that attach themselves to drunks and crazies, like pinning the tail on the donkey, until, one day, one of them ignites, and the whole thing goes up in flames. (Mike Bygrave) source 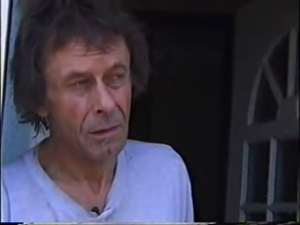 I kicked my own ass towards some empathy; what’s the point of being human without it? “The rumpled look is in,” he grinned, and neatened his hair in the reflection of a car window. The struggle became more visible – the struggle to retain his self image, his hope. “It’s libellous to suggest I live in chaos,” he said, surrounded by it. The narrator mentioned his mood swings, but there was never an in depth look at Brian’s manic depression. The man was shown without the usual lenses of bipolar, alcoholic, homeless being applied throughout (for a change). I was reminded of wildlife programmes, where the crew documents without interference. His grip on memories of a good past and the notion of a good future grew more admirable. He brushed his hair with a toothbrush in the aftermath of a house fire, vehement that he was neither depressed nor manic. “I’m happier than I’ve been in a long time.”

Finally he accepted psychiatric help, checked into Liverpool’s Broadoak Unit and was diagnosed with hypomania (what?). Six weeks later, claiming suffocation and boredom, Brian was discharged, still railing at the world, yet showing sympathy for the other patients. A couple of weeks later, he admitted himself, then he returned to London and inevitably, though rather unexpectedly…

Brian’s sales pitch was optimism, but his life pointed all one way, as Nath and Channel 4 must have realised at some point. In the end, he fell to his death from the roof of a cheap London hotel, Nath having done no more to prevent it than most of Brian’s “friends” (save the blessed relative who gave him his own place in Liverpool to wreck). Nath’s brutish objectivity got so close to suicidal mental illness that I wanted a futile gesture from him, at some stage, to salve the conscience of us viewers. It is a perverse tribute to his honesty that he did not provide us with one. (Andrew Billen) source

His death is still an open verdict, there’s no way of knowing whether he fell or he jumped. All anybody knows was that his last two purchases were a bottle of vodka and one of martini. It took two days for his broken body to be found in the dismal courtyard of that cheap hotel.

There but for the grace of something or other go all of us, right?