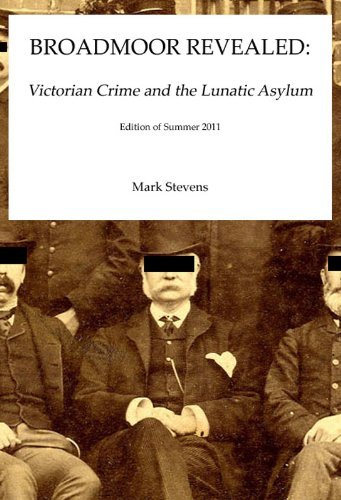 This book’s purpose is to publicise the archives of Broadmoor (England’s first criminal insane asylum) and since statutes of limitations exist, the public stories come from Victorian times. It was initially released as a free download, made great inroads into various charts and was tweaked and rereleased (and price added) in 2013. I read the freebie, I only found all that out afterwards. No doubt it got a ton of rubbernecker readers, but it’s a steady and sensible read. We get a good look at perceptions and treatment of mental illness in the 19th century and some carefully chosen case studies.

These diseases are still recognisable today: mania, melancholia, dementia. Monomania was an obsession with a single subject; amentia, absence of mind, would be described as learning disabilities, now recognised as something completely separate from mental illness. To these cognitive deficiencies, the Victorians added the concept of moral insanity. This was a disease free of delusions, but where the mind was unable to think and behave properly as it should. Although it did not fit the modern term of psychopath, itself a rather overworked word, it is perhaps the nearest to it that the Victorians acknowledged.

Stevens also devotes chapters to babies born in Broadmoor and patients’ attempts to escape from it. Perhaps the saddest tales for me were those of people imprisoned for petty crimes, who then lost their sanity in prison. Depending on your historical knowledge though, you may be surprised by some of the attempts at caring for patients. It is not a gothic horror story, though there are certainly enough salacious details to keep the ghoulish rubberneckers happy. For anyone with a more compassionate interest in mental illness, there are fascinating insights into the Victorian era in amongst the tragedies.

Related: A Boy’s Own Broadmoor – written by the son of the last medical superintendent of ‘Broadmoor Lunatic Asylum’, Patrick McGrath. It’s a very interesting #longread, I encourage you to click that link. McGrath’s father, Pat, had some interesting views of the distinction between madness and evil.

On the in-house dramatic society:

The best jokes were always of the in-house variety, for example, the appearance of a huge cardboard carving knife, or a giant dummy revolver being carried out onto the stage. It was a form of humour best appreciated by Broadmoor folk, who found the jokes irresistible, while the visitors were apparently left aghast. Ralph Partridge, husband of the Bloomsbury artist Dora Carrington, was also a historian of Broadmoor, and wrote this about the Broadhumoorists: “The funny spectacle of a homicidal maniac impersonating a homicidal maniac can probably only be appreciated to the full by other homicidal maniacs.”